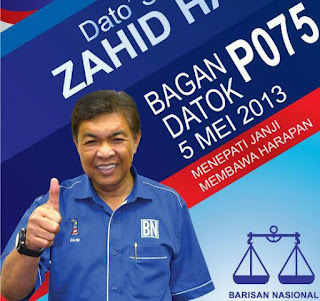 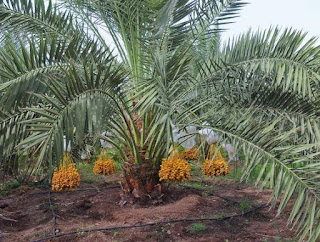 A Tibetan monk seen as a possible successor to the Dalai Lama is to be prosecuted for money laundering.

The decision to prosecute Karmapa Urgyen Trinley comes after an Indian court overturned a decision to drop charges. 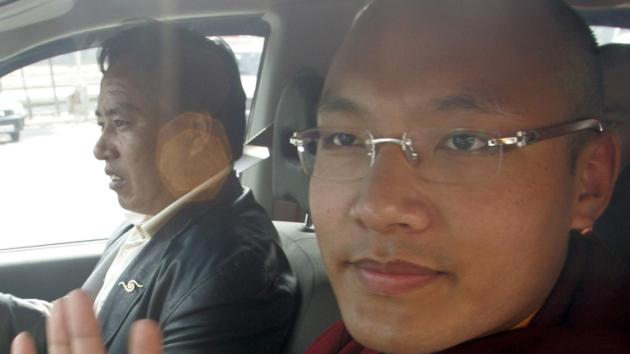 A judge at the Himachal Pradesh High Court issued an order for authorities to open criminal proceedings over the recovery of around $1m (£650,000) in foreign currency during a raid on his Buddhist monastery four years ago.
Criminal conspiracy charges were filed after the raid but a district court in 2012 dismissed the case but the latest appeal means Trinley now faces judicial proceedings.
The case dates back to a raid in January 2011 on a monastery in the Himalayan town of Dharamshala in which investigators say stacks of bank notes in 26 different currencies were recovered, including the equivalent of £65,000 in Chinese yuan.
The raid came after police stopped two people driving a car that was full of cash - the pair said the money was intended for a land deal involving a trust run by Trinley.
The 30-year-old has denied any wrongdoing, saying the bank notes were donations from devotees gathered over the years and he was not involved in any land deals.
The monk, who fled Tibet at the age of 14, is recognised by both China and the Dalai Lama as the reincarnation of the Karmapa Lama, the 17th incarnation of the head of the Karma Kagyu lineage, one of the four major schools of Tibetan Buddhism.
Since fleeing Tibet and reaching India after an eight-day journey on foot and horseback, Trinley has lived mainly at the Gyuto Monastery in Dharamshala, the northern Indian hill station that is the seat of the Tibetan government in exile.
He is seen as having the highest profile of an array of young lamas who could succeed the 80-year-old Dalai Lama.
Their appearances together have increased speculation he is being groomed as the Nobel peace laureate's spiritual successor.
Trinley's spokesman, Kunzang Chungyalpa, said the lama had great faith in India's judicial system.
"He strongly believes truth will prevail at the end." 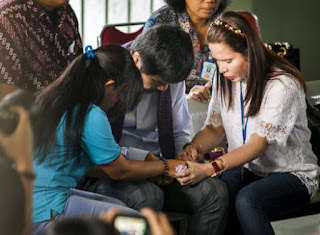 Boxing superstar Manny Pacquiao visited a Filipina on death row in Indonesia on Friday, with the convict breaking down in tears as she prayed behind bars with the Philippine sporting hero. 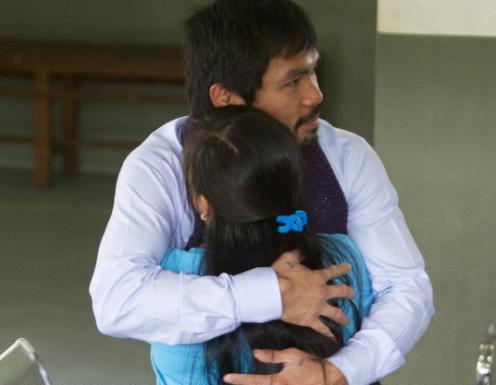 Mary Jane Veloso was sentenced to death in Indonesia after being arrested in 2009 with 2.6 kilograms (5.7 pounds) of heroin sewn into the lining of her suitcase.

She had been due to face the firing squad along with other foreign drug convicts in April but was granted a temporary reprieve after a woman suspected of recruiting her was arrested in the Philippines.
Indonesian authorities have insisted the case of Veloso, who has always maintained her innocence claiming that human-traffickers duped her, has only been postponed while legal proceedings run their course in the Philippines.
"We're hoping to help save Mary Jane's life, I think Mary Jane is a victim of human-trafficking," Pacquiao said after visiting the single mother of two young children in Wirogunan prison on the main island of Java.
During a 30-minute meeting, Pacquiao and his wife Jinkee prayed with Veloso. The convict broke down in tears as she prayed, a government official who witnessed the meeting told reporters, and at one point tightly embraced the boxing star. 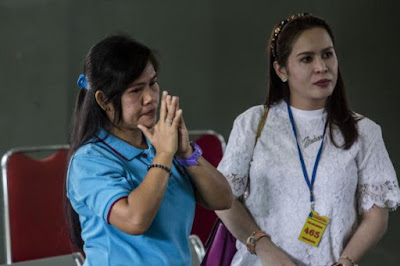 They swapped gifts, with Veloso giving Pacquiao a blue scarf emblazoned with his nickname "Pacman", and the boxer giving her money. However prison officials said they would keep the money for her as it was against the rules for inmates to have cash. They did not say how much it was.
Pacquiao, who was in Indonesia to film a television advert, was also hoping to raise her case with President Joko Widodo during a visit to the capital Jakarta later Friday.
Her case attracted huge attention in both Indonesia and the Philippines, with near daily rallies of support and celebrities urging Jakarta to show her mercy.
Pacquiao is an international star who last made global headlines in May when he was beaten by Floyd Mayweather in Las Vegas in what was dubbed "the fight of the century".
Widodo has vowed there will be no clemency for drug traffickers on death row as Indonesia is facing an "emergency" due to rising narcotics use.
Seven other foreign drug convicts and one Indonesian were executed as planned on the prison island of Nusakambangan in late April, sparking an international outcry. 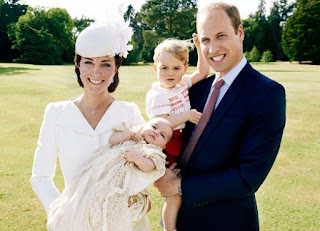 Only days after Kate Middleton and Prince William baptized daughter Princess Charlotte, Kensington Palace has released four official photos of the ceremony taken by famed photographer Mario Testino.
In one shot, Kate Middleton smiles while holding Charlotte and gazing at her infant. Charlotte, ready for her close-up, makes eye contact with the camera. In a second, the family of four poses, with Prince William holding Prince George (who is playing with his hair), while Middleton holds Charlotte. A third shot, black and white, features Prince William holding Prince George, and the last is of the entire family, both royals and Middletons. 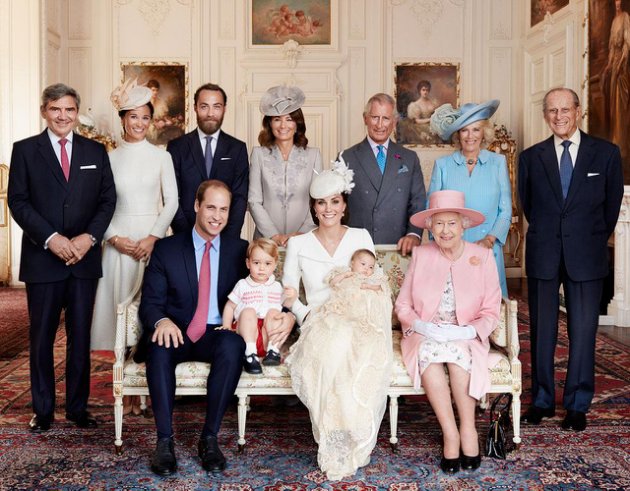 It’s not the first time Testino has snapped the royals. Aside from being Princess Diana’s favorite photographer (having shot her infamous Vanity Fair spread before her death at age 36), he took Will and Kate’s official engagement photos in 2011, along with previous shots of Prince Charles, Camilla, Duchess of Cornwall, and Prince Harry.
During Charlotte’s christening ceremony, the princess was blessed with a total of five godparents. “There’s no set rule for how many godparents a royal child is given, although it’s certainly more than the average person,” CNN royal expert Victoria Arbiter, previously told Yahoo Parenting. “William and Harry each have six godparents and George has seven.”
However, in the case of the royals, godparents won’t serve as potential legal guardians — according to Arbiter, the titles are merely symbolic for those who will provide guidance and friendship to Charlotte. And as for reports that Kate sister Pippa and William’s brother Harry were overlooked for the role, Arbiter says, “As aunt and uncle, they already have a close and meaningful relationship with the Cambridge children so there is no need for them to serve as godparents.” What’s more, she adds, in the U.K., siblings aren’t usually asked to be godparents.

Here are Charlotte’s five godparents:
Laura Fellowes: She’s William’s first cousin (the daughter of Diana’s sister, Lady Jane Fellowes). You also may recognize her as the little girl photographed with a mischievous William at the Duke of York’s 1986 wedding. The young prince was sitting next to Laura when he was caught sticking out his tongue and yawning during the nuptials.
Tom van Straubenzee: One of William’s best friends, he and fellow godparent James Meade were ushers at Will and Kate’s 2011 wedding. Fun fact: van Straubenzee’s wife is a castle heiress and one of their family homes was featured in a Harry Potter film.
Sophie Carter: She’s Kate’s loyal bestie and frequent tennis partner and she once dated van Straubenzee.
James Meade: Nicknamed “Badger,” Meade is an old classmate of William and lives near Anmer Hall with his wife.
Adam Middleton: He’s Kate’s first cousin and as a loyal Middleton member, he attended the duchess’ 2013 birthday party at Cirque du Soleil and Pippa’s launch party for her 2012 book,Celebrate.
The adorable christening photos top off a week of royal celebrations. Hopefully we’ll see some cute summer candids.

ICYMI because you were living under a rock and/or too busy eating non-contaminated doughnuts to notice, Ariana Grande caused outrage yesterday when a video emerged of her licking doughnuts and being kinda rude to staff at Wolfee Donuts shop in California.
Now, however, the pint-size popstar has apologised for saying she ‘hates America’ in the video, claiming she was just angry about America’s eating habits.


Arianators were pretty p*ssed yesterday when the CCTV footage came to light, which showed the 22-year-old licking doughnuts she didn’t intend to buy before encouraging her friends to do the same.
The star’s fanbase were left even more peeved by Ari’s reaction to the server who comes back to the counter with a fresh tray of doughnuts, with the singer snapping: “What the f*ck is that?”

She then continues with: “I hate Americans. I hate America.”
Hanger is dangerous, y’all.
After the video caused uproar online, the pop princess took to Twitter to apologise for and explain her actions, captioning the explantion: “need to clean up this mouth of mine & set a better example for my babes. i apologize and i love you. always learning. [sic]”
She wrote: “I am EXTREMELY proud to be an American and I’ve always made it clear that I love my county [sic]. What I said in a private moment with my friend, who was buying the donuts, was taken out of context and I am sorry for not using more discretion with my choice of words.
“As an advocate for healthy eating, food is very important to me and I sometimes get upset by how freely we as Americans eat and consume things without giving any thought to the consequences that it has on our health and society as a whole.
“The fact that the United States has the highest child obesity rate in the world frustrates me. We need to do more to educate ourselves and our children about the dangers of overeating and the poison that we put into our bodies. We need to demand more from our food industry.
“However I should of [sic] known better in how I expressed myself; and with my new responsibility to others as a public figure I will strive to be better.”
Errrr, still doesn’t explain why she decided some doughnuts needed some new fresh saliva-based icing, and we’re kinda sad there’s ear that every pastry/doughnut/cake we now buy may come with an side order of slobber, but okay.
She went on to explain why she had to pull out of a Major League Baseball concert scheduled to take place on Saturday, continuing: “As for why I cannot be at the MLB show, I have had emergency oral surgery and due to recovery I cannot attend the show. I hope to make it up to all those fans soon.
“That being said let me once again apologize if I have offended anyone with my poor choice of words.“